As promised - catching up and pics (long)

Life is finally calming down to the usual speed of fast (versus the recent marathon of autoban speedway) so I'm taking a quick break to catch up with my blogging.

12th Night was rushed but went very well. I was able to enjoy and participate in a friends laureling (more on that later), the Arachne's Web display went well thanks to Caiterina who sat table most of the day, the Guild Leader installation in court went smoothly, 5 pieces of kneeling carpet were turned in, and the Golden Poppy/Kingdom Artisan ceremony went smoothly (and my personal token is lovely). One unexpected nice thing happened, the husband was made a Man at Arms to the Knight who is currently Princess of the Mists. This is sort of a step toward squiring - a testing period for both. All in all it was a long day.

Sunday I was up early to go to Phillipa Turnbull's crewelwork class at Needle in a Haystack in Alameda. Phillipa is the one arranging the class in England in May with Jane Lemon and Jacqui Carey - Make an Elizabethan Swete Bag . Yes I'm going as are a couple friends.

Managed to make it through most of the Oerthan Trip before getting sick. Taught 2 classes on Sunday anyway. I've blogged over on LJ if you are interested on more of the details -- Stitching Along with Friends. In short it was a lovely trip.

Now for the backlog of pics and descriptions:

Bodice front for 12th Night - the gown is a cranach style gown in gold silk brocade trim on brick red velvet (a nice rich heavy cotton velvet). Since last year I did The Sleeve (see Archive for this blog - January 2006) to commemorate my stepping up into the Order of the Golden Poppy, I decided to do this bodice front to commemorate my completion of the year as Kingdom Artisan. 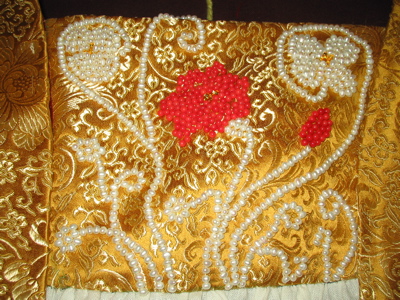 Next up was completing the leaf for Christian's Laureling cloak. Her laurel gathered some friends to make leaves for the laurel wreath on the back of her personal cloak. The ideas was to partially cover the silk (provided with shape delineated) in the technique of your choice. I opted for pearls and silver metal thread couched in a period pattern in the style of the work done on the Palermo robes.

Lastly I completed a project started several years ago. Linn Skinner charted for me a geometric pattern from Quentel's pattern book (1527) and a blackwork leaf pattern with verse space from Jobin's patten book (1596). The verse Vida Brevis Ars Longa (translates roughly to Life is Short, Art Lives/Survives) is how I signed my self for the 2 years I was Kingdom Arts Minister.

The plan was to do a bodice front similar to the gown in the Portrait of Barbara Schellenberger by Hans Bergkmair the Elder – 1501. While I wore the gown to step up, this inset piece was not finished and I was "trashed" by a negative laurel when I displayed it (2/3rds of the gold done) at an Artisan's display. Since then I've learned that I CAN document the technique for a cope - I've never said it would have been used on a dress. I have said that since the original was probably gilt brocade and I don't do such weaving, this is an instead. Having said that, I managed to face the piece and finish both parts in time to have it put together for display at this 12th Night. The gold is 10" wide on 40 count silk gauze - some rows are over 300 stitches. The blackwork is over 1 36 count done in Pearsall silk. The picture does not do it justice - it glows. 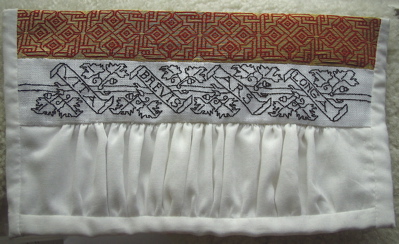 Lastly, I've been wanting to play with metal thread gobelin. My upcoming column is about the historical application of such. I had lots of problems finding a thread that would cover. Historically I was told that 371 or its gold equivalent was used. It doesn't cover. So many tried later I ended up using Kreinik very fine braid. Still don't like the thread, but it did work well. This is a pic of the flat. Now to make it up into the pincushion with mini tassels then photograph it for the column. This is 36 count - silk is tent over 1 and of course the gobelin is over 2. 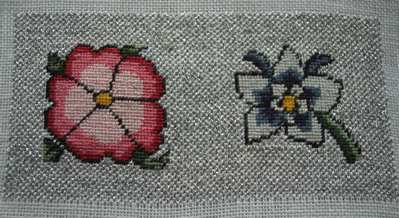 Lots more in the works. I"ll update again soon.
Posted by Sabrina at 1:13 PM No comments:

In process the gobelin pincushion - half done.

Pics next week
Now back to the needle