Linn is here! Hurrah! She arrived on Thursday. Saturday was the Artist Trading Card (ATC) workshop. Although it only had 6 participants we had fun and were productive in the way that only small groups can be. We unlocked our creativity and our glue sticks/spray/etc. Linn had brought lots of stuff - fabrics including some wonderful sheers, threads - iron on and others, sequins - all types and some sequin waste, beads, paints, crayons, and and and.... It made the creativity easy.

We made individual cards rather than a whole sheet at a time. We had card blanks (watercolor paper) and separate labels to apply. We started with the crayons that are watercolors. It was a great way to jump in with both feet and create a background. The class was very diverse and our cards were very different - even if we used the same materials.

As time went on cards acquired names. I created and finished 4 and then began a series In the picture (which does not do justice to the texturedness of the cards) they are:
summer spring
autumn winter
Fire 1 Fire 2 - these are in process 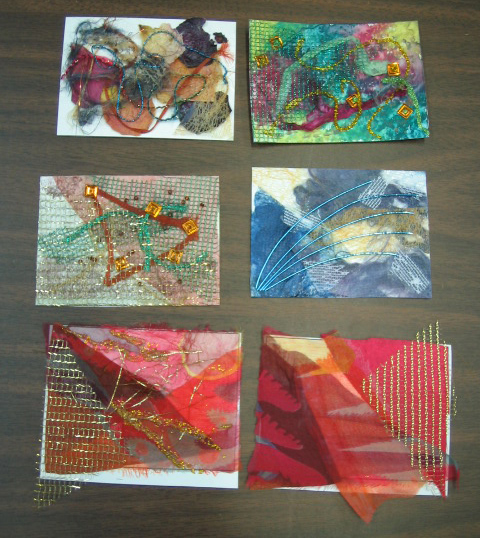 Running around for turkey day and family gathering. Hope everyone's day is full of good food and good cheer!
Posted by Sabrina at 2:59 PM 1 comment:

First a bit of catching up. A few posts ago I mentioned creating ornaments for our fund raiser. Here is a pic of the ones I did. There were 2 of the "ornament" but one is on the opportunity drawing swag. The pattern is a free on from the Rainbow Gallery website. The button trees were not my idea, but they were quick and fun to make. 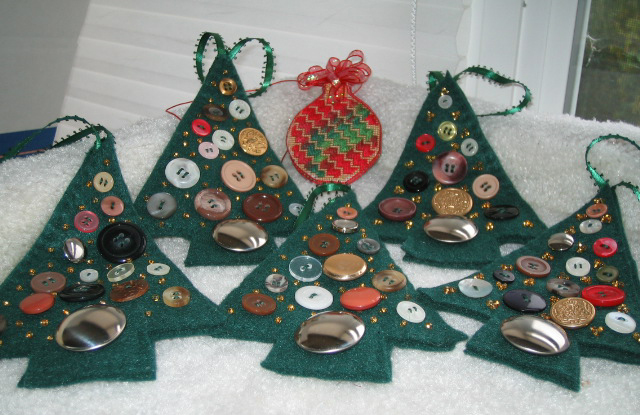 Several of the ladies had signed up for Sharon B's tour classes, but had yet to be informed that the tour was canceled. We did manage to meet the original goal for the class which was to ensure that they had 4-6 blocks built and a familiarity with some of the basic stitches. I'm not sure we managed to do more although I did talk lots about design and placement of stitches, motifs, bits and bobs, etc.

While the core of the 9 1/2 people in my "group" got "it" and even ran with it, 3 1/2 opted out after the first day to do their own thing, although they did attend the "talk" portions. Everyone in our group said they enjoyed it and learned lots, but I guess I am more used to more "heavy duty" workshops where you work hard and learn lots. This was a LOT more relaxed.

Things I would do differently:
•really work at building blocks with different methods - we talked different methods but did not push it.
•do most of the talking for the first hour in the am and then again after lunch - but once they settle down. We had alternated talking design and stitches - 6 talks on each through out the time - 30 min on average for each (the syllabus was 20 pages). However, the "audience" was not always attentive as they really wanted to get on with the sewing early on. In part this is the quilt background - give them a pattern and they do it. I'm not unhappy, just need to factor in the differences. Once they got their blocks built then they were happier about the talks - they realized their value.
•have a bigger white board for drawing - I only had a 2'x3'. They could see it but...

Things that worked really well:
•having a pile of fabrics and bits and bobs that they could buy in to for a set fee
•having preprinted templates - 3 for them to play with to start. After #3 they were ready to do one freehand.
•having the print picture on fabric bits for them - we did 4 pages with around 20 Victorian motifs/pictures.
•doing the stitch learning on aida cloth and having them each have a CQ Stitch Guide. I talked about the how of the stitch and made them use the guides. After all I won't be there with them when they are at home. There were a couple who wanted more hand holding, but this method worked mostly okay.

Food was good and there was plenty of lighter fare. Atmosphere was pretty fun, but there are things we could do to make it less "serious". I'm afraid some of my frustration was showing - trying to talk over the other 2 groups when they had not settled down yet (sigh!).

Next up, the shop wants to have a regular CQ meeting time/monthly. Perhaps with classes people can take quarterly. We shall see.

Need to take more SharonB classes to learn more!!! I was able to answer most of the questions and address the issues raised, but I am not fluent yet in CQ design.

Learned lots. Made a couple friends. People seemed to really appreciate the effort I made to convey information -- even a couple in the other groups.

Final score: 5 new cq people, 3 timidly trying, 1 1/2 will consider trying cq next year -- after the current rounds of projects is done. Plus a couple more who might be interested after listening in despite the chaos.

All in all a positive weekend.
Posted by Sabrina at 10:42 AM 1 comment: