Tension -- in stitching that is

I am a self professed thread control freak -- a tension-holic when it comes to all forms of fiber work. This does not mean that I am tight with my work, but rather I want the thread to be controlled. I want it to be in its spot and not wobbly. I want it to stay in place and do its job. For some needlework or fiber work this means letting up on the thread and in other applications it means pulling like crazy on the thread -- and everything in between.

I have also realized that I don't feel comfortable with a technique until I find the right way to control the tension. This may include needing to adjust each time I do the technique; as the materials used will have some affect on the need for the amount of tension/control.

I am not a perfectionist. I will not frog my work until it is "right". I will frog if absolutely required and I will spend some time futzing with it until I am okay with the outcome. I admire those who have the perfectionist gene, but I accept that it is not in me.

That all said -- I have been spending my time doing lots of Temari. I started last year with an introduction class and then tried to play a bit on my own. Then I discovered that Barbara Suess was giving online classes through Shining Needle Society and an EGA Correspondence Course (GCC). 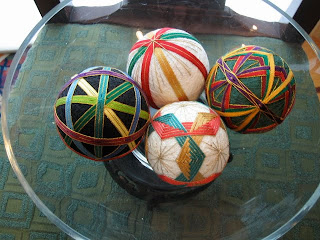 My first one is the cream with gold, red, and green lines. Then I attempted the green ball from Temarikai.com. I returned and finished the green ball recently after the Morning Glory class. The other cream ball is called Mitsubishi (4 diamonds) and that was my 2nd workshop with the same teacher as the first class. Then having learned a complex 8 division (yes there is a whole new language to learn too) I did the black rainbow ball using a color wheel.

Color -- OMG there is so much to learn about color when doing Temari! I am finally finding that I really need to resort to a color wheel and understand about tints, etc. Up to now I've just used my fairly refined color sense. I guess no more short cuts.

This is Barbara Suess's online class - Morning Glory. Learned lots and had fun so signed up for Echo Star as well. More on that soon. 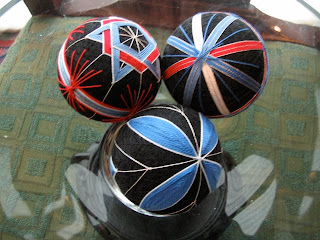 This is the GCC course. I will be shipping my balls to Barbara Suess for evaluation next week. It was an interesting learning experience. All 3 balls were 25 - 25.1 cm in diameter. I was REAL careful on doing the divides, but you would be surprised how much off something is even at 1-2 mm difference (big sigh!). Of course I can see the errors, but most people will not so I am supposed to give myself a break on this :)

Am using the Temari to break up all the administration and other work that I do for EGA. Wrapping balls is almost meditative. The stitching is creative and helps create a "good space" which is important thinking time.

Now back to "work". Will take time to go to a class on Or Nue with Lucy Barter from the Royal School of Needlework this weekend. Then next week will do some cooking for the holidays. I'm bringing dessert so have pulled out my family recipe for Pecan Pie. It is from a distant relative's grandmother who was from Louisiana. Yummy!

Have a great holiday and may all your tension be in your stitching!
Posted by Sabrina at 1:25 PM 3 comments:

Running Fast - So What is New?

When last we left our intrepid embroiderer she was off to Pittsburgh for the EGA National Seminar. It was hard leaving, but it was good to be away and not see Pete in everything.

First came 4 days of Board meetings and Finance Committee. We work hard both with pre-meeting materials to digest and at the meetings themselves. There was lots to work through, but I think we have a workable plan to move forward.

Caped off the end of this part with a dinner with Rissa Peace Root, editor of CQ Online and her husband. Fun to finally meet people that one only corresponds with online. We have plans ... (insert evil laugh)... be afraid, very afraid.

Took time on Sunday to go to the Phipps Conservatory. It was a good place to go clear the head and just enjoy nature. They have a lot of Chihuly glass and were also having a Frabel exhibition of glass. Loved seeing it all - lots of eye candy and stitching ideas too.

Then plunged into my 4 day class with Jonalene Gutwein - 17th C whitework sampler. The 6-10 hour prework was really 30-40 so didn't get to do everything. Did learn some good hints and tricks. Did get to just spend time with ladies stitching and making new friends. All good!

Wednesday headed over to the Frick Center. I really wanted to see the house so we did the house tour - a snapshot of the turn of the last century including a player symphonic which they turned on for us. Way cool! It made for a nice half day outing.

I had been asked to do the Invocation for the closing banquet. I have been very vocal about not using words that people find offensive -- not so much the words but when put together are Christian. In a banquet of 400-1000 people, some people aren't and even the most liberal Christian wording can be offensive to those not of the persuasion. Instead, I gave thanks, hopefully in words that no one found offensive although some found it missing and wondered a bit when I finished. Now to find something interesting for the Invocation at 2010. This also meant we sat at the head table. Glad I decided to take the conservative dress up cloths and Will had brought his beautiful blue blazer,dark gray slacks, Italian silk tie, and conservative blue shirt. He was looking yummy as he helped pass out the 2010 invitational goodies.

We returned to hit the ground running to do the 1000 Hands Quilt at the booth for the Pacific International Quilt Festival. Immediately followed by my only opportunity to take a full day of professional training. Which was followed the following weekend by the Inter Kingdom Needlework Symposium at which I taught what was supposed to be a 4 hour Reticella workshop. The workshop (8 students) was going well when I found out that they moved the Kingdom Officers meeting up 1.5 hours. We ran through the remaining info and with the permission of the students, cut about an hour off the class (grump).

Then dived headlong into preparing for this weekend's Region meetion. This includes the Finance Committee meeting, a Board meeting, a Friday night workshop, and then the Saturday meetings. Of course I am teaching the Friday night workshop - Artist Trading Cards (stitched). We are planning on doing something with ATCs at 2010 -- stay tuned!

I decided I needed some fun so I signed up for a Temari Ball class called Mitsubishi - Diamonds. Below is a picture of the 3 balls from Barbara Suess's online Morning Glory class, the first ball I made and my Mitsubishi ball. I have signed up for Barbara Suess's next online class Morning Star and her Correspondence Class through EGA. The projects are such that I can do them in pieces. I actually find winding the balls a good mid-day relaxation. 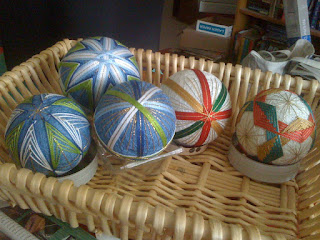 Posted by Sabrina at 2:16 PM No comments: