I started doing embroidery when I was in grade school. Mostly crewel pictures and follow the lines on table cloths. My Mom did needlepoint and that was the next step. I branched into doing some minor embroidery in high school. I also started doing costuming in high school/joined the SCA. Played in the SCA, Dickens and other such through college and did some limited costuming. Returned to SCA, etc a few years later (post graduate school) and did more sophisticated costuming. But something was missing. The decoration on the garb was not "right". Commercial trims and such just did not work.

In the late 1990's, I began learning more about embroidery and doing it on garb. In 1999 I taught my first class - a blackwork band. 10+ years later I am circling back to doing embroidery on garb. Truly integrating it.

Since we are off in a month or so to a 5 day war and I am in charge of A&S, I want comfy clothes. I will primarily be running around in Vikings or Cotehardies. I need a coif for each. The Viking coif is relatively plain, but it will get a bit of decorative herringbone stitch to hold the hem down. The other is a St Brigit's cap. It too will get a bit of herringbone and a very simple needlelace edging. Nothing is really stand out decoration, but rather completion of the whole item.

In truth, this is where I was heading. The knowledge and ability to "finish" my garb in a way that is "right".
Posted by Sabrina at 10:39 AM 3 comments:

Results of playing with wool 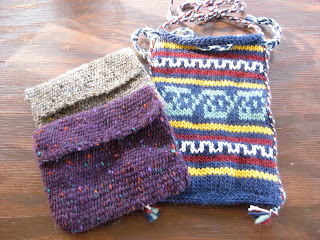 About a year ago, there was a "challenge" on Live Journal to offer to make a gift for the first 5 who signed up. Your prize was a gift from someone else on whose journal you made a request . It was a "pass it forward" kind of thing. I made 2 of the Viking Chain weaving bracelets and these 3 pouches as my "gifts".

I am enjoying the Medieval Islamic Knitting. It is rhythmic and fun. The projects are on the small side so you are done quickly. I think that it takes as long for me to make the kumihimo shoulder strap braid and the drawstring braid as it takes for me to knit the bag. There is also the finishing to do of working in all the thread start and stops.

The other 2 pouches are weaving in the round. I have a variety of wooden forms. You lace the form with kitchen string at the top and, if you want to have a flap, at the mid-point. You then do a continuous warp through the string - top of flap to front edge and reversed. You warp as thickly as you want. You then do a continuous circular weaving - over under, using the warp threads to make the weft. Good TV time.

The projects were delivered this spring so I can now unveil them for all to see.
Posted by Sabrina at 2:25 PM No comments: