One of my needlework groups, in particular my ANG chapter, had an interesting challenge that I opted into - Robin style. They gave us a piece of 14 ct canvas in cream, a line chart with 120 threads divided into sections of differing sizes, a few threads in the red/pink/purple range, some charts and said go. The design needed to be within the 120 thread square. The design theme was hearts. The threads were to all come from stash. 7 months to complete.

I was partially successful. Here is the process I went through:

Despite the guidelines, I did spend a lot of time staring at blank canvas. To start I stitched the border and then the lower 4 section lines. Gave myself a mental talking to - it is a practice piece (not like some of the amazing stitchers in my chapter whose every piece is award winning perfect). Also, I don't have the temperament to take my hobby and design it to the inth degree - for me it needs to flow from me.

Finally I jumped in with a couple of the predefined sections and put in some patterns. Yes I did modify the chart of sections.

The bargello hearts was easy. It was a pattern I liked and I had lots of threads that would work - or so I thought. I love silk but silk and canvas don't mix. Fortunately I keep a large number of cotton threads on hand for teaching basic embroidery and lucet so I dived into my teaching stash. I had been given a card of very velvet so used it to make a frame inside the section to give the area a finished look.  Can I say now how much I hate having to strand each 6 thread section, then recombine and THEN lay the threads. Eventually you get into a rthyme but... and then there is the counting that is never my strong suit.
Issue 1 has now appeared - the base is heavy so the other areas need to balance.
Issue 2 - there is a line across the lower third that needs to not become a mental block. Unless you have a defined focus, the eyes should not rest on any one area, but move around the canvas. Hearts are great in this way, in that they are, in effect, arrows.

Then moved down left. There are hearts in there - outlined and then filled - over 1. I didn't like the look of all the open area so used a gauzy thread in straight lines to cover. Not sure I like the look - but it definitely makes for a 3D sense.

2 heart blocks up and left - one is a brick stitch pattern of laying one color with a heart bead on top. I wanted something that would be background but the final dimensions of the section don't work - too much height for the size bead. The other section is right and left gobelin background around the geometrically stitched heart using an overdyed thread. Tried to pickup some of the coloration from the bargello section.

One way to pull a piece together visually, is to use a limited palate of colors or threads. This resulted in more pink that I normally like, but at least it was a dusty pink. I pulled a range of threads and colors to start, and then moved the lesser ideal colors out. I tried to only pull from this group during the project and found I easily discarded most of the options until I had a palate that meshed fairly early in the process.

Right side is from one of the needlework magazines. The gold threads run all the way through the  hearts so the wine and red overlay the gold. Liked the effect, but it does not show well in the photo.

Left section is one of the gauzy threads done in squares on angles. The buttons needed a background and I needed something to balance the red in the hearts on the right side. The buttons float a little bit more than I like. Maybe next time I will stretch the canvas threads and poke the shank through. 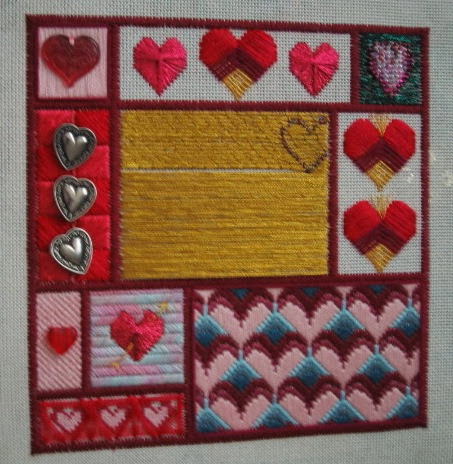 Top Right - failed experiment. Many years ago there was a class where you cut the side to side canvas threads and folded them back. Then you used the up/down threads like you would for Indian Thread Beading. It worked sort of - beads worked but I could not get the definition I wanted. I then used a metallic thread that matched the dark of the bargello teal in straight stitches to mimic the upper left block background. The background is too heavy a color but the area is too fragile for me to take the threads out and replace them :(

Top box - repeat of the 2 versions of laid hearts. Again I needed something to pull the piece together. Repeating patterns and threads does this.

Center gold box - trammeled the threads. The thread is a 6 thread lightly twisted metallic. Using the whole 6 meters, untwisted the threads and laid them in each line - R to L and then L to R, over 1 stitch at each end. This mimics classic goldwork. Then using 2 strands of the gold, I couched, in a progressive pattern, each line in the top 1/3. The heart was then couched using the same count, but only over 2 threads, as the bargello below. The heart is a metallic overdye. The goal was to couch the whole section and "float" the hearts in a line from top R to lower L - maybe someday. The biggest problem with this idea was to find sufficient coverage of the canvas.  I think next time I might paint the canvas first so uncovered areas are not so blatant.

Still want to put in some version of a background for the top and R side box. Back to the I don't like naked canvas. Now to find the umph to finish off the bits or fix the areas the are blatantly wrong to my eye.
Posted by Sabrina at 1:15 PM No comments: