I know time flies when you are having fun, but life seems to do so also.
When last we left our intrepid adventurers...... we were setting out on a nearly 3 week road trip. But before I tell that story - here is the bag from the class I took on knitting and felting. 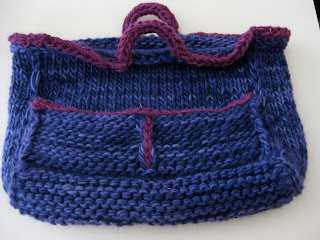 The bag is smallish and designed to teach changing colors, picking up stitches, eye cord, and a couple other bits. This bag is not yet felted so also not yet blocked.

It has lots of errors but I think I will call them design variations. 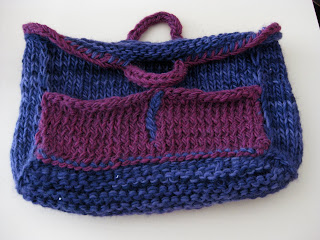 I also had started on this bag with the left over yarn and some other I had in stash. I am finding that knitting is smoothing. I can do it in front of the tv in the evening and just relax into it -- if it is not too challenging. 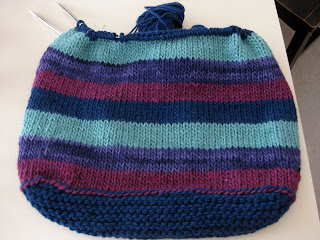 The plan is to felt it as well. I have a bit more to do and then the handles. As you know by now it is very hard for me to follow any pattern. I need to make it my own. This is a variation of a pattern since I haven't ever made handles which curve.

Before this class I had finished this hat. It was my first "finish" even before the Islamic knitting projects. It was my learn to knit on circular needles. Of course this is my hat and now Will wants one too -- just not as much brim. They will be our wear to bed when camping hats when it is cold. 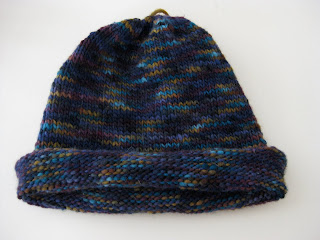 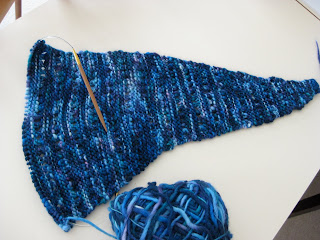 I also had gotten brave and started a "lace knitting" shawl pattern. I made a classic beginner error - choosing the wrong yarn. The yarn is obscuring the lovely pattern. It is an 8 row pattern. You add on both sides. Obviously I will need to block this. When I finish this ball of yarn I will do the other side which is all decreases.

Then Will's injury happened.
The trip was 2875 miles in total. Will road in the back seat with his leg propped up. It was in a cast from high thigh to ankle. When we left he was on crutches but could not carry or lift anything so if I could not carry it or lift it - it didn't go with 2 exceptions - a case of bottled waters small and our "tourney box" with minimal items for the event at the end of the trip. Our clothes were divided into regular and medieval and set into separate bags and suitcases. Despite trying hard to take a minimum of items, the car was full for the first leg of the trip.

Home to Redding - visit to Shasta Stitchers. We also did a quick stop at the Sundial Bridge.

Then Redding to Rogue River for Southern Oregon Stitchers. The plan was to off load the medieval event stuff and leave it with our hostess there. Originally this would have been a huge amount of stuff, but plans changed. It was still great to leave off the extra stuff so we had space in the car for the rest of the stops. It was SOS's Founders Day luncheon event and they treated me royally.

Then Medford to Eugene for Cascade Stitchers. They put on a lovely dinner for us. On our way out of town we saw a sign "Alpaca Festival". It turned out that Black Sheep Festival was that weekend in Eugene. It was free at the fairgrounds. The parking was free. We escaped with only a small amount of damage to our pocket books.

Then Eugene to Portland for Rose City Stitchers who put on a lovely reception for us. We stayed with my cousin in Portland for 2 days to visit. After reading Allie in Stitches - we paid a visit to Fabric Depot where I did find brocades for 3 vests for Will - including 1 that is embroidered. It will make a lovely vest for his Victorians which he will wear at the opening banquet for the National Seminar.

Then Portland to Spokane. The first half of the trip was lovely through the Columbia Gorge. Wish we had had some extra time to just take in the scenery. We stayed at the Hotel Lusso - very lovely European style hotel. The ladies of Mt Spokane Stitchers made me most welcome.

Then Spokane to Seattle. It was like driving Hwy 5 - long - boring drive - sigh! We stayed at the Inn at Queen Anne. It had a kitchenette which was very nice to have. Will's brother and family live in Seattle so we spent time with them including dinner at the Space Needle. I hadn't been there since the World's Fair which was 1962.

Then down to Tacoma to visit the Hotel Murano and have lunch with the members of Evergreen. They are hosting the 2012 Region Seminar at the hotel. It is a lovely site. We also took a little time to visit the Chihuly Bridge and Tacoma Art Museum. The Glass Museum did not have any Chihuly glass out so will visit it another time.

Then Seattle to North Vancouver. We had a lovely hostess who housed us, cooked for us, and took really good care of us. North Shore Needle Artists welcomed me and hopefully they will be more active in our Region with 2012 coming up. They are lovely people and fabulous stitchers.

Then we began heading south - first Vancouver to Olympia. We stayed with friends who helped us restock in preparation for the event. Fresh goat cheddar from a nearby farm and fresh home made Chevre from our hostess.. YUMMY!

Then Olympia to Rogue River. Had a nice visit with our hostess and her husband. Got to see his trains. They are about 1.5 - 2' high and the engines pull 3 cars plus "passenger cars" in a local park. They helped us reload the car for the final trip over Grant's Pass to Gold Beach Oregon.

At Gold Beach we stayed at the local Motel 6 which was about 15 minutes from site. With the help of friends the Arts and Sciences and the First Ever Medieval Sock Wars Event (not connected to the modern Sock Wars and which henceforth will have a different name) was set up and nearly ready for opening on Friday morning. 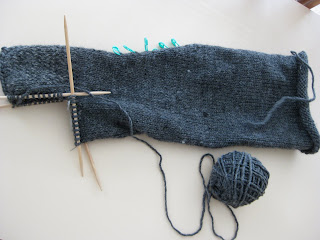 The event itself went beautifully and the A&S portion totally ROCKED!!! 3 days of classes - 30+ teachers and around 50 classes! 33 knitters/naalbinders for the knitting war portion. The "winner" was a lady who finished her first sock on day 1 and her second on day 2. She then made me a felted purse on day 3. We also had several judges choice - yak socks, first ever knitting project, and naalbound socks. Of course most of the socks were not finished on site but I've been hearing finishing sounds from many.

We used Christian's Pre-literate sock pattern primarily and the socks were done with worsted. I've been working on mine and I have just finished the heel of sock 1. They are knee socks to be used with garters. I took the lady from Brown Sheep's advice and added in a poly or nylon wooly serger thread for the heel and will also do so for the toe. 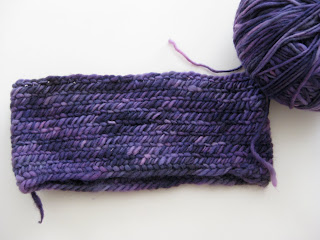 I also reconnected with my Naalbinding guru and reviewed the stitching which I had learned at Maker Fair. With all the intervening stuff, I was a bit hesitant about what to do next. It only took 5 minutes, but it was an important 5. This will be a hat too. I have a bit more to go before I begin the decreases.

The long trip was from Gold Beach to home. Nearly 10 hours but we made an early start so made it home for dinner. Whew!

Nearly caught up. Will's cast came off and he has a "dial" brace. It has been a couple weeks and he is already at 132 degrees of movement for his knee. Now comes the real work of slowly strengthening the leg.

We also have a new project -- 2 new kittens but that will have to wait for the next post. You can find more about our trip, etc. on my Facebook account.
Posted by Sabrina at 2:19 PM